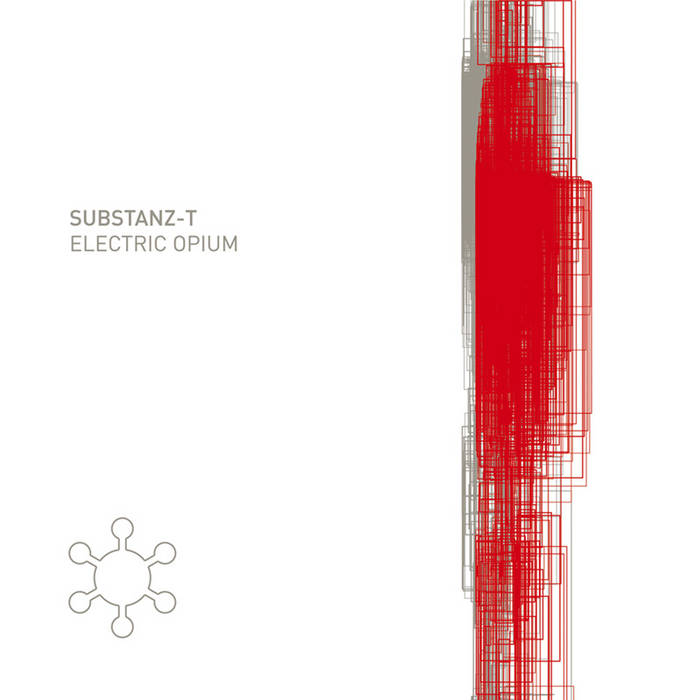 frankfurt’s arne stevens and alex lange of substanz-t return after a 2-year span to release one of hymen records’ most immediately accessible albums, electric opium.

all the traits you know and love about substanz-t are in-tact: down tempo beats, industrial funk rhythms, and precision soundscape creation. yet electric opium, substanz-t’s 4th album, comes from a much shinier place than their 2001 release, the critically acclaimed tripped experiences. electric opium bursts forth with bright soul and a vibrant sound stewed in urban lounge dynamics - where you’re as likely to get an earful of tight hip-hop rhymes as you are a hallucination inducing melody.

it would be easy to say that these changes stem from stevens and lange working with mc’s sisco and ronin (who appears on megashira and panacea releases), as well as the legendary f. m. einheit of german noise guitar experimentalists einstuerzende neubauten. but that’s not it at all; electric opium’s the next generation of electronic sound to emerge from the new urban experience.

for alex lange, electric opium is just the next logical step in the substanz-t sound - which has been changing since the duo started together in 1991. “with our music we try to induce a psychogenic mood in the listener. especially with electric opium, we tried to create a relaxed opium-like feel.”

“electric opium is a snapshot of the last two years,” adds alex.

the most striking aspect of electric opium is its ability to transcend genre, corralling elements of hip-hop, ambient, techno, and funky breaks to create a complete experience. electric opium begins with “peyote sol of halls,” a smoky trip-hop groove complete with fantastic organ work that’s on par with anything by thievery corporation or tosca in the last two years, as well as some bang-up percussion work by f. m. einheit.

landing einheit for a guest spot was purely an accident, notes alex. “we just bumped into him in frankfurt, he was producing nihilismus de luxe for the theatre in frankfurt. we gave him a tripped experiences cd and invited him to a gig... after that we came together for a session.”

the fruit of that session isn’t limited to just one track, either. einheit brings his theremin expertise to bear over pulsing synth arpeggios on “steer the stars,” which runs heavy on the dubby techno vibe most commonly associated with monolake and basic channel artists, as well as oliver lieb projects like l.s.g. and if you’re feeling funkstorung’s latter-day hip-hop experiments, the hefty swagger of sisco’s menacing vocal rumble on “place cells” will conjure up images of social decay and blade runner-esque desperation in the human condition.

as electric opium moves along, substanz-t continues to push the envelop with broken beats and a wicked vocal run by ronin on the provocative “burning consciousness,” taking jello’s ambient hip-hop feel further into ambient dystopia. “the bullet in your hand” is pure mental excursion music that propels you into the epic final track, “ubique,” where f. m. einheit does dual duty on theremin and percussion to craft the soundtrack for a cratered, desolate landscape. for the devoted, there’s a hidden track of blissful substanz-t sound that’s well worth the search.

put simply, electric opium is proof that substanz-t is the future of urban electronic sound.