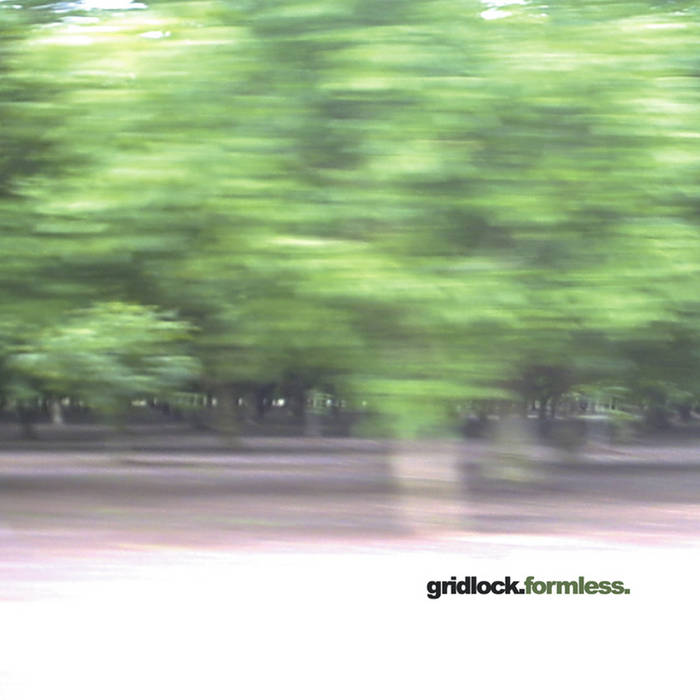 BlexTw11 It's my favourite electronic music album so far. I love the atmosphere. I love the music. I just love everything on this album.

goodwillah One of the greatest electronic albums of all time for me. So much soul and harmony in chaos. I'm glad gridlock suddenly popped up in my mind and I could find it here. Absolutely sublime. Favorite track: pallid.

had enough of the glitch, the clicks & cuts, and laptop jockeying? tired of soulless albums masking nonexistent musicality with technical feats of indignant genius? bored with bedroom artists incapable of delivering a single compelling track?

formless, gridlock’s fourth album and first full-length for hymen, is as far away from the acrid, slight world of plug-ins and software music as you could possibly get, which is rather ironic considering that gridlock’s mike wells and mike cadoo live in the would-be epicenter of laptop music, san francisco. full of lush melodies and luscious analog warmth, formless shuns the pretense of flaccid software acrobatics, instead summoning from the depths of human emotion a musical epic that touches upon the gravest recesses of memory.

the overtones are clear from the opening track, “pallid:” formless reaches back to the early days of modern electronic music, sonically referencing classic works like autechre’s incunabula and aphex twin’s selected ambient works 85-92. yet in keeping with gridlock’s more aggressive mechano-industrial background, wells and cadoo situate formless firmly within the roots of metalized noise and grinding rhythms. as a result, formless feels unlike any other electronic release in recent memory, realizing raw emotion as carefully crafted sound design.

while the sound of formless is a significant step beyond the harsh percussive elements on their 2001 album for unit, trace, wells and cadoo both remark that it’s all just a matter of course for gridlock, which began in 1997 with their the synthetic form lp on pendragon records. “gridlock was an idea with a specific definition as ‘heaviness in electronics,’” explains wells, “and i believe that cadoo and i have realized this vision with each release.”

realizing that vision involved taking advantage of new equipment at 5-25 audio, well’s mastering outfit, to push gridlock into new territory, emphasizing spatial depth and melodic invention throughout the recording of formless. the results are nothing short of breathtaking.

the epic begins with “pallid”’s heavy mood, a product of forceful noise structures pounding through an idyllic synth melody - setting the stage for formless’ central theme of emotional catharsis borne out through conflicting sonic textures. fans of l’usine, marumari, funckarma and darrel fitton’s jello project will find the cavernous expanses of “return” an aural feast, filled with harmonies shaped as much by stereo imaging and time delay as they are by intuitive chord progressions. another fitton project, the famed bola on skam records, serves as the debarkation point for “song23,” an intricate interplay of wavering synthesizer themes and emotional counterpoints that swells into a grand climax before heading into the melancholic leitmotifs of “invert.” things become more contentious on “chrometaphor” and “scratch,” where gridlock’s penchant for fractured beat textures and discombobulated rhythms rush formless into a more agitated finale. “displacement” forges archetypal hip-hop rhythms into a mindful industrial chant, while the emotional thrust of “the 8th winter” and “atomontage” withers into a sepulchral dirge, “done processing.” like one of mahler’s early symphonies, formless conveys the spectacle of a death and spiritual passing as sonic revelation, a declaration of emotion torn asunder.

the ebb and flow - and sheer musicality - of formless will doubtless come as a surprise to those expecting (or hoping) gridlock to produce a harsh, rabid collection of apocalyptic noise terror.

“we always had a joke about jumping the fence!” jests cadoo, who also runs the minidisk label n5md, of the duo’s industrial background. “we are directly descendant from the ‘i’ word...no two ways about it! but we constantly move forward; that’s important. most of the folks that started the same time, they are still doing the same thing. that’s not enough for us.”

nothing short of a colossal musical achievement, formless extends gridlock beyond the ordinary genrefication of their san francisco peers into the sonic sublime.