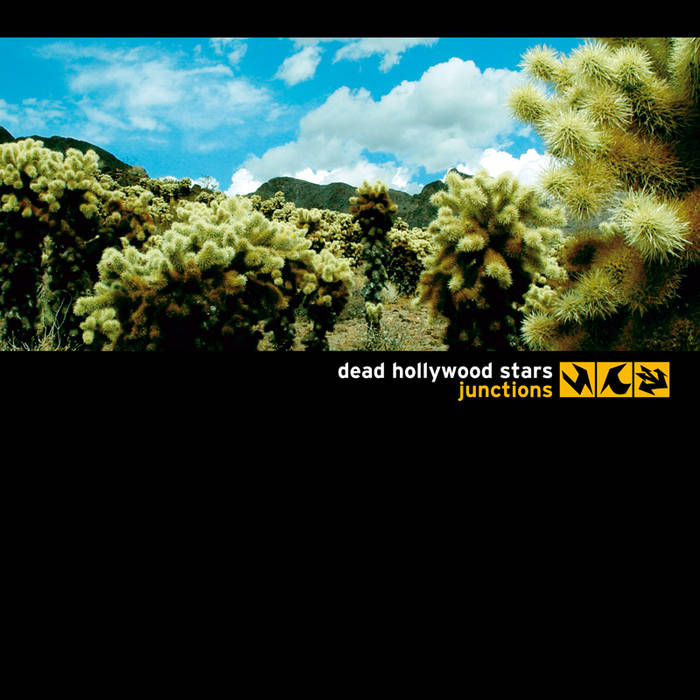 like a moth to a flame, dead hollywood stars’ second album, junctions, dives deeper into the morass that is the american psyche—exploding in an emotive death dance of dark ambience and pop music archetypes before vanishing into thin air.

john sellekaers (xingu hill), c-drik fremont, and herve thomas - who share connections through urawa, ambre, moonsanto, and ammo - had met with plenty of success as experimental musicians and artists before releasing dead hollywood stars’ first album, 2000’s critically acclaimed gone west on hymen records and mad monkey records. yet that album proved a watershed for the trio, utilizing elements of classic country and western music to evoke a sense of aimless, restless desire that outstripped their past successes in the realms of dark industrial and experimental electronics.

“it (was) a chance for all of us to do something as freely as possible,” explains john sellekaers, whose musical journey began with admiration for john carpenter soundtracks and cheap keyboards in the 80s before leading to his first xingu hill album on nova zembla in 1995. “the main idea was to literally ‘go west,’ to play with the idea of a classic western atmosphere and to twist it as much as possible.”

the pinnacle of that playing around was “dreamland’s burning,” a western anthem drawn from the smooth bodies of warm wooden guitars that encapsulated the ethos of freedom and anarchy running through the unexplored west. its gentle chords reminiscent of vini reilly’s later durutti column material glide up through an ominous wall of effects and synths, which pummel an otherwise placid surface.

junctions, however, searches for a pop archetype even more emblematic of american culture. dead hollywood stars return to guitar sounds as a root element, but a chief inspiration is derived of that uniquely american invention: cinema and film music.

“more than just visual,” adds sellekaers of junctions. “we prefer to think of it as stories, or at least immersive ‘scenes,’ most of the time completely abstract. film scoring is a great influence to us—but more than just imaginary soundtracks, we're trying to convey some atmospheres or feelings.”

junctions excavates these images, these feelings from the usual drivel of electronic music by running both fiery and frozen like an ennio morricone soundtrack. the chill, mechanical precision beats and calculated, claustrophobic vocals of “last train to aldebaran” crash against the lulling guitar and chime tones of “the pure voice” and “back from exile,” itself a meandering fusion of improvisational stringed instruments with arcane blues lyrics delivered beat poet style.

the visions of the music, though, are what make junctions a step beyond the thematic suggestiveness of gone west. thanks to dead hollywood stars’ cumulative engineering and sound design experience, the images jump through your stereo into plain view on the very waves of the music, much like the suggestive leitmotifs of famed film scorer angelo badalamenti. one and a half minutes into the tribal, spiraling drums and wisping tones of “triangulating the daemon,” a human bark lurches from the left as a harrowing angelic curse shimmers down from a high periphery, followed by an unearthly, bestial cry just a few feet over your head. then a lone guitar note, sweetened by the vocal tension, leaps straight into your lap with a full-blown melody behind it.

“i think we're slowly building our own little world with these records,” explains sellekaers, adding that the group made a deliberate attempt to expand beyond the “typical western clichés” that colored gone west by working with brussels-based psyche-rock band the joint between and long-time collaborator j-r rob (u)rdang. “(it’s) a humble sonic universe—very much influenced by literature and movies. ghostly figures, deserted places... a junction where different characters meet, all with their own stories.”

to sellekaers’ mind, dead hollywood stars taps into a pop culture truth often lacking in the finished musical products churned out by the biz—even if the end result doesn’t blare across corporate radio. and for that reason, the potential appeal of junctions runs beyond the scope of any genres into which it fits.

“i still think that dead hollywood stars is a ‘pop’ project, at least compared to our other records. we wanted to do a record that could be listenable outside of the relatively small circle of electronic music fans. a record that we could give to virtually anybody, without having to explain first that it is very weird or difficult music. we wanted something easy to listen to, more accessible, but without compromises and with all the depth that we try to add to our other records.”

and for those missing the striking visual element in junctions, dead hollywood stars include their first video made for “last train to aldebaran” by austin, texas-based video experimentalists fake.