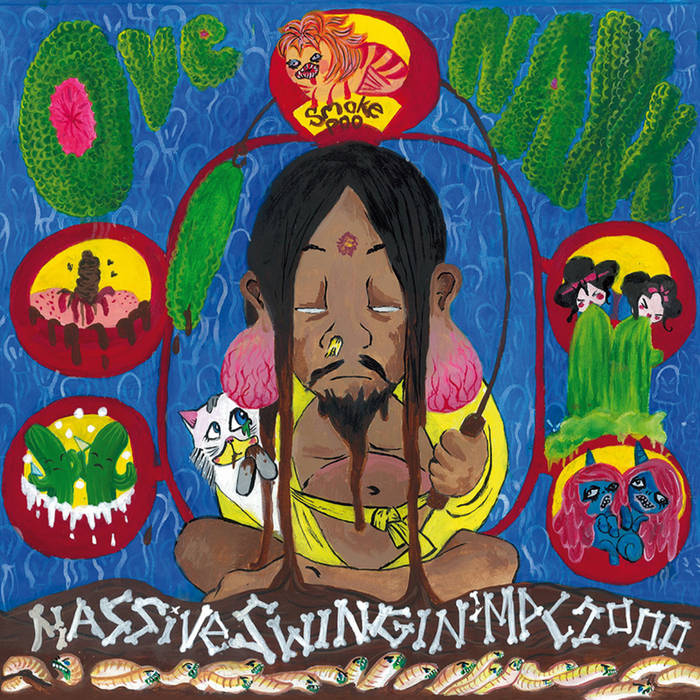 little is known about ove-naxx, a mysterious and extremely talented young musician from japan's highly-evolved electronica scene. when asked for biographical materials, he simply replies: "dirty monkey from osaka japan". ove-naxx is pioneering a delirious take on raggamuffin drum & bass and post-modern nipponese pop. catchy synth melodies buzz inside fast-moving thickets of percussion. reggae and video-game music are an obvious influence, as are japanese harmonic systems. the overall sound can be compared to artists such as venetian snares, dj /rupture, or squarepusher, but ove-naxx's superb production has a voice all its own. since 2002 he has produced well-received releases such as an ep on dj /ruptures soot label and a split album with fellow breakcore prankster jason forrest.

for hymen records, "massive swingin' mpc2000" is a quite unusual release: the format (our first 10"), the artwork (check it out on your own!) and also the sound itself. straight beats are combined/compromised by sudden breaks, randomly-set little melodies, easy-listening rip offs, funk guitars, jazzy bass lines and voice samples (you will never will know where they're from)... it sounds crazy, but hell ove knows what he's doing - 'ccccssss' is a perfect example: low-fi keyboards meet high tight straight beats that mesh with a ragga-voice - it will work perfectly for a party at 4:00 a.m..

the tracks are 'selected tunes from 2003-2005', as ove says: a truly fine selection, a very unique record, a pleasant time is guaranteed for all - enjoy!