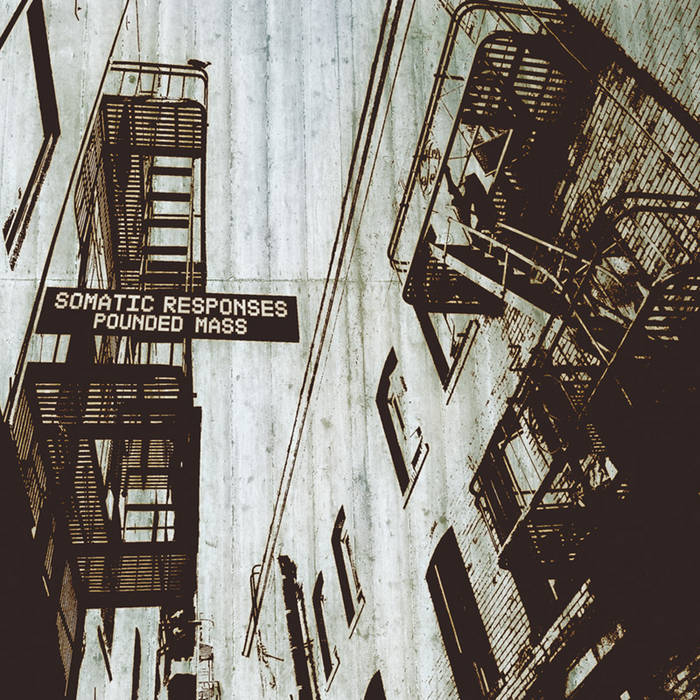 for those rubberheads who consider somatic responses to be idm - thanks in part to their melodically brilliant 2002 album for hymen, touching the void - take heart: pounded mass stylistically name checks your idm and experimental electronic icons like aphex twin, squarepusher, and lee norris.

somatic responses’ john healy and paul healy also have a message for these folks: rethink that tag. pounded mass is one acerbic noise assault after another, the kind that will make most fans of twee synth tunes soil themselves.

“we've taken a harder stance for this lp, as the title suggests,” says john. “i think that we were categorized as idm for a bit, which we never really understood…so we've applied a few good measures of distortion, et cetera to this release. as far as concepts go, it's more of a ‘machines perceptive’ but with a very heavy dose of humor thrown in. there's much more of a mixed bag in this release, including some turntablism, pure ambient soundscapes, breakcore, hardcore, hip-hop.... and that's just in one song.”

that one song, the tripadelic “bathrobe brawl v1,” infuses the psychotic scratching effervescence of dj spooky with breaks and bass worthy of a depth charge or dj shadow cut. one track later, on “go off,” the welsh brothers healy crank up the somatic responses style of electro-mechano ferocity that would otherwise plant pounded mass firmly in the realm of xanopticon or orphx. then there’s the aptly-titled “the day idm crawled up its own arse,” which john says is “a simple statement of what we think of the elitist and good old-fashioned cock-head idm producers.”

despite their slight disquietude at being pigeon-holed into a myopic genre, one where artists often remain completely disconnected from their audiences, john and paul healy concede that the technoid themes they conjure up make their greatest impact when the listening environment is conducive to, well, listening. dancing, clubbing, and having a high time are fine for a casual night out, but the sounds of pounded mass demand your full attention - even at 140 db over a premier pa.

“(o)ur music and music that we hear stimulates us on a level outside of ‘club land’ so mood, atmosphere and track progression are more important than repetitive beats and sequences,” says paul. “i think to us what a track develops from and into is important…each track is a kind of journey and the road should be interesting with cool landscapes and scenery, not straight and boring!” and hymen is here to assure you that none of those tracks - those journeys - on pounded mass will be straight or boring.