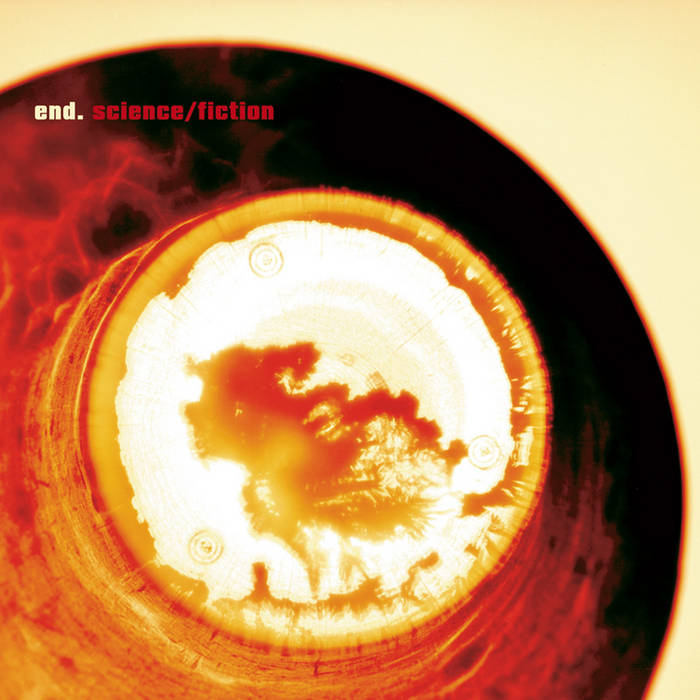 the term “science-fiction” often dredges up from memory two things: b-movies, and bizarre, unsettling music. music that’s supposed to capture the feel of the otherworldly, the alien, the unexplored and therefore un-mastered realm of our imaginative experience. sonic themes and melodies so evocative they craft visions in your mind’s eye. that’s pretty much what you get on end’s debut album for hymen records, science/fiction.

throughout end’s science/fiction is a strong sense of theme and melody that’s as resonant as any modern electronic album you’ll find today. science/fiction revels in expansive percussion patterns and lavish chord structures that swoon with tension, where sonic ideas posited in unrelenting break sequences escalate into apocalyptic zeniths—then implode to silence. an arresting epic unfolds inside your ears.

science/fiction’s romantic depth makes it kin to the work of aphex twin, atom heart, biosphere, dead hollywood stars—and a dead-ringer for fans of unit’s sleeper classic from 1999, the narcoleptic symphony. yet unlike those other artists, end’s charles peirce, who has appeared previously on planet mu and collaborated with snog and speedranch (forthcoming on ipecac records), builds the dark post industrial themes of science/fiction without the aid of traditional synths and drum machines, relying exclusively on samplers and computer equipment.

“my concern with end,” writes peirce, “is digital process, with my personal definition of digital being the ability to copy, clone, and sample things. so end is really about sampling as process, the recontextualization of sounds and ideas, not simply aesthetic means.

“so, while science/fiction is meant to sound like the sort of things people make via drum machines and keyboards, i don't actually own either.”

this degree of unorthodoxy is not only reflected in the music peirce makes as end, but in his entire life experience. although born in virginia, peirce moved numerous times, calling various states (and for a short time guatemala) home before attending college to explore literature, creative writing, and other humanities. like so many other americans his age, peirce found computers intuitive and went to work maintaining mainframes after college—and began experimenting with his roommate’s extensive music studio. but unlike so many other americans his age, peirce shuns the prevailing mass-consumption ideology, owning neither cell phone, car, nor tv. he professes an admiration for serge gainsbourg, marxist theory, musique concrète, and experimental literature (some of which is evident in the song titles for science/fiction). in short, he’s not interested in living the way everyone else lives.

in a similar fashion, science/fiction doesn’t sound like the things other sample-crazy people make. science/fiction posits musical constructs of intense architectural detail, where the composite brandishes these details as proof that the whole is greater than the sum of its parts. deconstructing “an elaborate accounting hoax” produces a collection of break beats, a rumbling bass line, and various sonic artifacts. but as a whole, the song evolves from chaotic effects swimming in stereo into a shimmering convergence of speed and needle-sharp chimes that plays with past prodigy or orbital anthems as much as it does with contemporary matthew herbert or squarepusher. similarly on “immeasurable distances” and “society of the spectacle,” the resulting effect of end’s complex sample overlays is one where melody and theme seem to emerge from otherwise meaningless sound artifacts.

yet it would seem that end should sound more fractured, clinical, and academic like other artists who experiment with process, such as oval, frank bretschneider, or carsten nicolai.

“i don't think you can decontextualize sound sources entirely,” notes peirce, explaining why end sounds so different from other process-focused artists. “for me theme or narrative is of course important in that i don't think you can escape the cultural context of a particular sound. we all have associations we make, and while these associations can change over time—say, how people our age think of ‘the blue danube’ in relation to 2001 rather than its original historical context—they are just as inherent to the work as the actual notes or noises being played.”

short of spiraling into a jamesonian cognitive mapping exercise, peirce suggests that end and science/fiction resides in a different kind of space.

“sampling, though still about process, has transformed pretty fundamentally of late i think. whereas people used to sort of sample individual sounds, drums, riffs, whatever, we can now sample genres, styles, the entire body of a musician’s work. we can play as much with the context and associations that a sample brings about as with the sound itself.”

science/fiction, as such, is about the resonance that musical themes—wherever they may originate—have upon our emotional experience of that music.

“music as artwork is fine,” notes peirce, “but there's something to be said for ‘album’ as an experience and as a way to connect to people on a bit of a more visceral level.”

"theatres of memory" originally composed for the film "pretend" by julie talen.