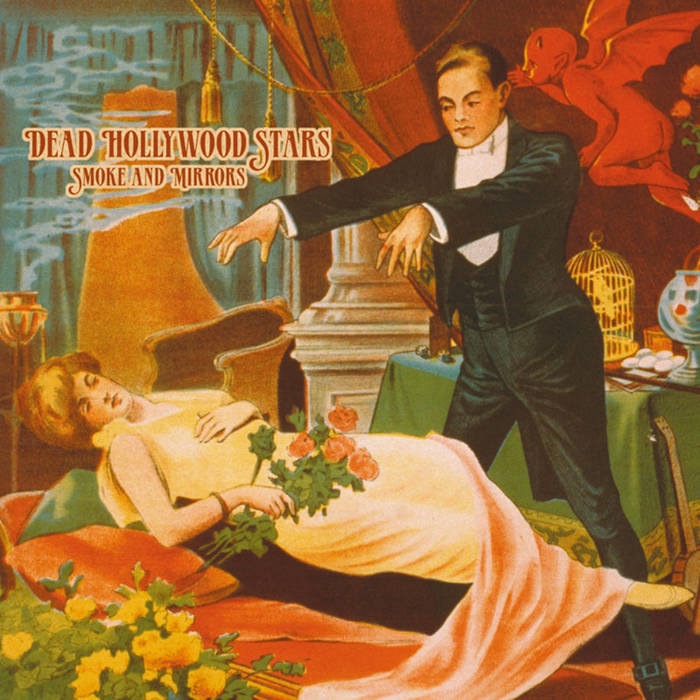 three years after their critically acclaimed second album, junctions, dead hollywood stars are back with a brand new record - exploring once again a different facet of their twisted american dream.

admirers of the previous two albums will be in familiar territory, a feeling reinforced by the omnipresence of the slide guitars, ghostly melodies and the unique combination of acoustic with electronic elements. but smoke and mirrors quietly leaves the “desert ambient” of gone west (2000) and the more cinematographic realm of junctions (2002), so that it can dig deeper.

more song based and acoustic than before, delicately crafted, and yet disturbing, smoke and mirrors opens a new door to the odd universe of dead hollywood stars. a place where dusty slide guitars meet mysterious trumpets, 60's exotica infects old-school electronic pulses, and where the shadows of badalamenti and morricone are always near. a clash of spectral jazz, ambient americana, spooky boogie and psychotronic pop...

smoke and mirrors looks behind the curtain, searches for the blurry, mysterious and sometimes ominous world hidden under the familiar appearances.

each track is a little vignette, an open story, a scene of a long-lost script. it could be the soundtrack to charles burns' black hole series or to a fevered night in a lost motel (the night country); a gentle drive under a pastel sky or a wrong turn leading to an orwellian nightmare (ocean drive, 1984); a strange reception in the dead of night, or simply corporate business as usual (masquerade); a pleasant afternoon with a quiet golf player - but isn't there a hint of madness in his eyes? (tea with mr. yi).

magic, tricks, lies - a multi-faceted world of wonders that dead hollywood stars reveals through the six tracks of this ep, presented in a beautiful 3" cd embedded in a clear 5" disc.

on this record, john sellekaers (electronics, keyboards, samples) is joined by quentin de hemptinne (guitars) and alex grousset (drums). quentin has recently worked with imminent - his first appearance on a recording - and alex is a very active drummer on the montreal scene, playing regularly in a half-dozen bands, ranging from jazz and blues to punk-rock. mathias delplanque (known for his dub project lena on quatermass) makes a special appearance as well.

john sellekaers has produced about 40 records in the last ten years, and his most well known project is probably xingu hill. in early 2005, he released altmann's tongue (ant-zen), a collaboration with the writer brian evenson and tamarin. he also runs the metarc mastering studio in montreal, canada.