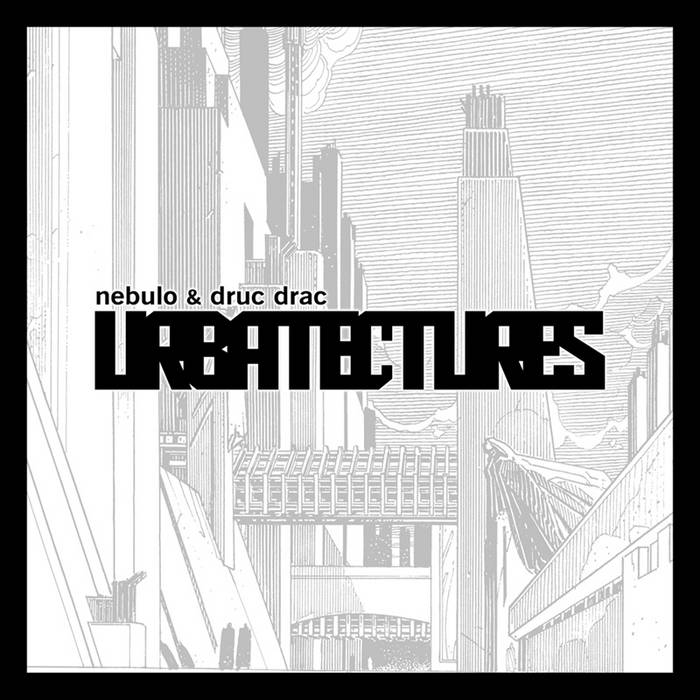 this album is a musical interpretation of the graphic novel 'la fièvre d'urbicande', the second part of the award-winning 'les cités obscures' series by by belgian artists françois schuiten and benoît peeters.. 'les cités obscures' (cities of the phantastic) is set on an alternative earth, where humans live in independent city-states, each of which has developed a distinct and civilization, all in some way focused on architecture and architectural styles. more info: en.wikipedia.org/wiki/les_cit%c3%a9s_obscures

to bring this project to fruition, nebulo and druc drac explored various modes of composition to illustrate the rich universe portrayed in the novel's pages, using the exquisite corpse technique (rive nord - rive sud), transposing the narrative to be in accord with the chronological sequence of events found in both the general storyline (urbicande) and specific chapters within the work (les jardins suspendus, le réseau), mathematical composition relating to the evolution of the «network» (polynome), and finally freely inspiring themselves, drinking deep from the world created in the story (brigades urbatecturales, hexaèdre, micromega and sunurb).

the sonic breadth of this release births a hybrid between acousmatic / electro-acoustic music, electronica, ambient and darker industrial. 'the fever of urbicande' was the inspiration for a wide range of clicks and cuts, haunting sound collages, fragile melodies, acoustic piano excursions, powerful synth chords and even impulsive beat sequences reminiscent of experimental technoid pioneers like pan sonic. intricately constructed but also far from any academic sobriety, its cold, distant and captivating feel makes 'urbatectures' an ideal imaginary soundtrack for the mind's projector, and of course a great accompaniment for viewing schuiten's and peeters' works.